Biden Emerges from Hidey Hole and Lays Out the Truth, Behold!


Posted by theKansasCitian at 1:49 PM 21 comments:

Over the weekend Joe Biden emerged from his underground hidey hole to declare the riots raging in major Democrat run cities as, "President Trump's America."

When Donald Trump says tonight you won’t be safe in Joe Biden’s America, look around and ask yourself: How safe do you feel in Donald Trump’s America?

Just one day after a Black Lives Matter and Antifa member gunned down an unarmed Trump supporter in the streets of Portland, Mayor Ted Wheeler took to the mic, holding a press conference in which he blamed President Trump for the violent and destructive riots that have been raging in his city for more than three months. Claiming Trump hasn't done anything to quell the violence, despite the mayor taking to Twitter just days early to reject offers of assistance from the president.

Today, I sent this letter via email to @realDonaldTrump declining his recurring offer to aid Portland by sending federal enforcement to the city. https://t.co/W85EDfriyk pic.twitter.com/CC1IWTp5k8

So, are the riots that are raging in Democrat run cities Trump's America?  Let's look back and see:

Within the first year of the president's term a Harvard University professor was arrested for disorderly conduct by police who responded to a 911 call reporting a man attempting to break into a home. They arrived to find the professor and his driver attempting to smash in the front door of the home. Less than a week after the incident the president admitted not having the facts, but proclaimed the police acted stupidly and that he wasn't sure what role race plaid in the incident but that everyone was aware that African Americans and Latinos are stopped by law enforcement disproportionately. A year later an independent panel found that the professor could have spoken more respectfully to the officer indicating he was combative in a manner that resulted in his arrest for disorderly conduct.  Despite this, the charges against the professor were dropped.

Not all that long after a 17-yr old African American young man was shot and killed after attacking a Hispanic member of a neighborhood watch. The member of the neighborhood watch was arrested and charged with murder.  When asked about the incident the president responded that the incident makes him think about his own kids and that if he had a son, he would look like the young man killed. Later, the man charged with the young man's murder was found not guilty by reason of self defense after witness testimony, along with video and photographic evidence, showed the young man attacked him and was severely beating him before he fired his weapon. After the acquittal, a group calling itself Black Lives Matter was formed and began sing social media to allege justice was not served.

Less than a year later, a 6ft 4 in, 300 pound African American male and his friend were stopped by police in response to a call of theft in progress after the African American male had shoved a store clerk and stole a package of Cigarillos. The officer reported the man attacked him and went for his gun, when he did the gun went off. At that point the man and his friend fled on foot. The office pursued, and the man stopped and charged the officer.  The officer then fired several times killing the man before he reached him. At a grand jury, witnesses and physical evidence backed up the officer's account of the incident and they chose not to indict. The Black Lives Matter organization latched onto the incident sparking riots in the city that spread to more than 170 other cities across the country.  In response, the Department of Justice ordered the FBI to open a civil right's investigation into the incident. The DOJ later released a statement claiming the police department routinely violated the fourth amendment in stopping people without reasonable suspicion and used unreasonable force against them. The DOJ then quietly cleared the officer of any wrong doing. In response, the president stated we may never know what happened in the incident.

During the time Black Lives Matter protests were raging across the country, two uniformed NYPD officers, one Asian and one Hispanic, were executed as they sat in their patrol car by a member of Black Lives Matter who was on a mission to avenge the shooting previously mentioned.

"Faced with this violence, we wonder if the divides of race in America can ever be bridged... When African-Americans from all walks of life, from different communities across country, voice a growing despair over what they perceive to be unequal treatment; when study after study shows that whites and people of color experience the criminal justice system differently … when mothers and fathers raise their kids right and have ‘the talk’ about how to respond if stopped by a police officer, but still fear something terrible may happen, when all this takes place more than 50 years after the passage of the Civil Rights Act, we cannot simply turn away and dismiss those in peaceful protests as troublemakers or paranoid."

Many were left wondering how anyone, especially a sitting president, could consider the killing of 5 officers a, "peaceful protest."

When Joe Biden claims that the ongoing riots in Portland, Seattle, Kenosha, Chicago and other cities is the President's America he is right.  The problem is, it isn't President Trump's America, it is Obama-Biden's America, fore all these incidents occurred during the Obama presidency.

But, don't take my word for it. Let's look at the data.

Google Trends shows "Black Lives Matter" and "Antifa" began dramatically growing in use dramatically years before Trump won or even began his campaign for president.

More over, a search of printed publications show the terms "Black Lives Matter" and "Antifa" began getting used more commonly almost as soon as Obama and Biden took up residency in the West Wing.

It's no coincidence that the violence born from Obama's rhetoric has continued and spilled over into the Trump presidency.  Upon taking office Obama's justice department latched onto a radical leftist philosophy of restorative justice. In restorative justice, criminals are not prosecuted for their crimes, instead they simply ask for forgiveness for the harm they caused and are allowed to escape prosecution.

Organizations, backed by Soros, spent millions during the Obama-Biden years to get radical leftists elected to District Attorneys positions in major cities all across the country. DA's like Jean Peters Baker, Kansas City, MO and Kimberly Gardner in St. Louis, MO took over the prosecutor's office in the two biggest cities in MO.  They began dropping or reducing charges, refusing to prosecute, and even releasing violent criminals back onto the streets.  In Gardner's case, she even maintains a list of 150 plus police officers her office will not take any referrals for charges from. As a result, crime in these cities exploded and they are now two of the most deadly cities in the country.

These radical DA's are also positioned in cities like Seattle, Portland, and Kenosha where they are refusing to prosecute violent protestors and are releasing those arrested the very next morning. It's gotten so bad that Seattle's African American, female police chief resigned over efforts by far left democrats on the city council to defund her police department and the refusal of the city DA to prosecute violent criminals.

To date, 33 people have been killed in the latest rounds of Black Lives Matter/Antifa protests. Democrats running these cities and their conspirators in the mainstream media continue to put forth lies that these riots aren't happening and that they are "mostly peaceful" protests. 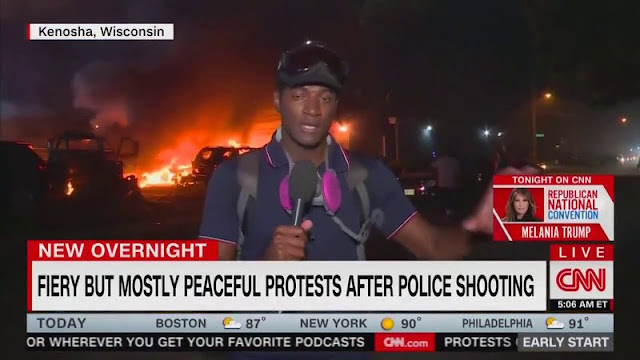 Posted by theKansasCitian at 10:08 AM No comments:

Once again the left shows their true colors.  Valeria Plame Wilson, famous for being a not-so undercover CIA operative outed by a fellow Democrat and blamed on the Bush admin took to twitter to blame jews for all US wars.

It's similar to when the left blamed the economic collapse they caused on Jews using code words like 1% and "Wall Street".

I was Googling Valerie Plame in order to find a good picture of her and this was all I could find. 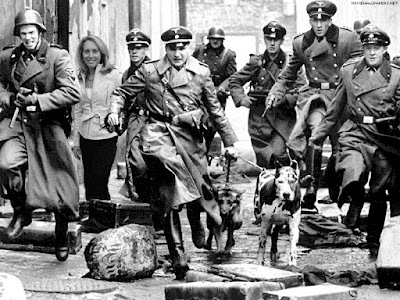 No word yet from the SPLC on when they will list Valerie Plame Wilson on their site.

Posted by theKansasCitian at 3:26 PM 11 comments: 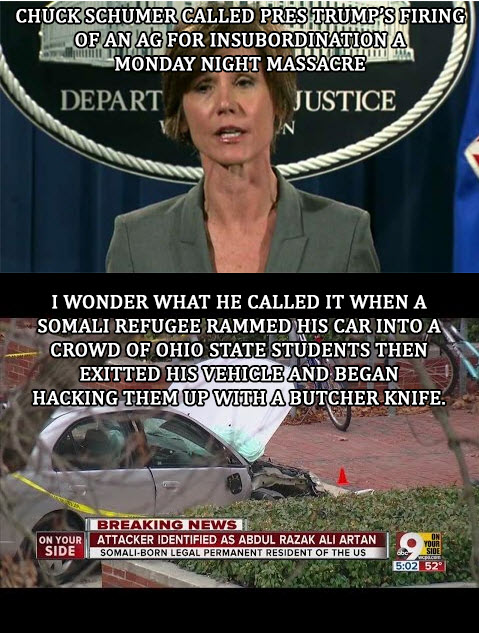 Posted by theKansasCitian at 11:19 AM 2 comments: 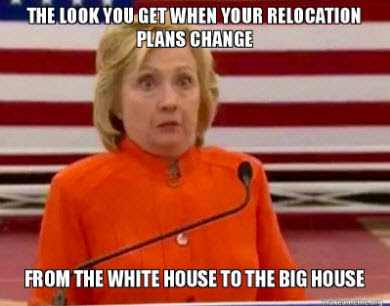 Posted by theKansasCitian at 2:37 PM No comments:

Draft Hillary for Ambassador to Libya 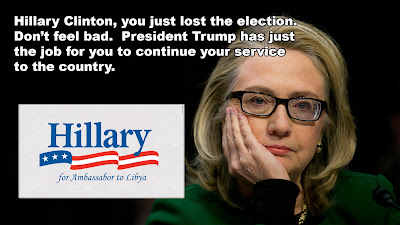 Posted by theKansasCitian at 2:01 PM No comments:

In 2012, after Romney's resounding defeat, I opined that the path for victory for the GOP was not pandering to minorities, but to expand their support among white voters by targetting the hard working men and women with policies that help all workers, regardless of race.

Trump did just that and he out performed all the experts.
Posted by theKansasCitian at 11:21 PM No comments:

Is the Election Rigged? Ask a Bernie Sanders Supporter. - Updated through Nov 3, 2017

Posted by theKansasCitian at 2:36 PM No comments:

Is the Election Rigged? Ask a Bernie Sanders Supporter

Posted by theKansasCitian at 10:23 AM No comments:

Salon.com, one of the most leftest new media outlets on the Interwebs is finally admitting what everyone already knew, there is zero evidence Russia behind the Wikileaks email dumps and that the Clinton campaign is clueless when it comes to cyber security.

"A researcher at the company SecureWorks told Motherboard that Podesta was sent an email on March 19 that appeared to have come from Google. In the email was a link using Bitly, a URL shortening service. Podesta clicked on this link, which took him to a fake Google page, where he then typed in his login information."

"The alleged hackers appear to later have sent Podesta’s emails to the whistleblowing journalism organization WikiLeaks, which has published them this month in installments. WikiLeaks says it has 50,000 messages to and from Podesta, and has published roughly 2,000 per day."

"The Clinton campaign immediately blamed the alleged hack of Podesta’s email account on the Russian government. The Clinton campaign also previously blamed the alleged hack of the Democratic National Committee on Russia, claiming it was part of an elaborate conspiracy by President Vladimir Putin to sway the U.S. election in favor of Donald Trump — although campaign officials admitted they did not have any evidence."

Let me repeat, "although campaign officials admitted they did not have any evidence."

"In early October, the Obama administration took the accusations a step further. The Department of Homeland Security released a statement officially blaming the Russian government. The brief, three-paragraph statement did not cite any solid evidence, however. It was also full of ambiguous language — noting that the U.S. intelligence community “is confident,” and that the hacks “are consistent with” methods used by Russia."

"Most major media outlets have echoed these accusations, but the U.S. government has yet to provide any solid proof."

Meanwhile, Clinton and Obama's rhetoric, including threatening a cyber attack against Russia, has significantly heightened tensions with Russia, so much so Russia has been having their citizens prepare for a nuclear strike from the US.

And they say Trump is dangerous?


Posted by theKansasCitian at 3:43 PM No comments: